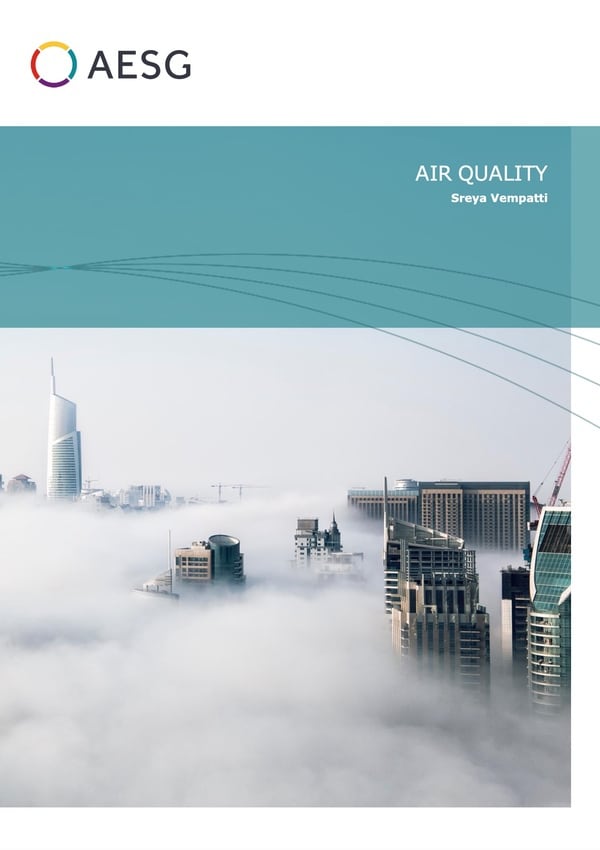 Ambient outdoor air quality is an important metric used to measure overall environmental quality in a particular area. Declining levels of air quality can lead to a host of health problems, besides causing harm to the natural and built environments. Industrial processes, burning of fossil fuels, construction activities, vehicular traffic, agricultural activities, and deforestation are among the most prominent causes of air pollution worldwide.

Governments worldwide have been monitoring ambient outdoor air quality to keep track of major pollutants and accordingly plan out mitigation measures. The most common pollutants that are measured are particulate matter, which includes both PM10 and PM2.5, ozone, nitrogen dioxide, sulphur dioxide, carbon monoxide, lead, and volatile organic compounds.

Ambient outdoor air quality in the UAE Air quality standards in the UAE currently exist at the federal level. Cabinet Decree (12) of 2006 Regarding Regulation Concerning Protection of Air from Pollution [1] has set out limits for the six major air quality pollutants in the country, as shown in Table 1. All the Emirates currently follow the Federal standards, and no other Emirate-specific standards have been published to date.

Air quality monitoring stations exist all over the country, and are operated separately by each Emirate within their respective jurisdictions.

In Abu Dhabi, 19 air quality monitoring stations are located all throughout the Emirate as per the most recent data available, which is from 2015. These are operated by the Environment Agency-Abu Dhabi. Figure 1 shows the distribution of these. As expected, the urban areas of Abu Dhabi city and Al Ain have the most monitoring stations, with 8 and 4, respectively. The remaining stations are scattered around the Emirate, with the bulk of these spaced out in the Western Region. [2]

The Emirate of Sharjah also has an air quality monitoring network consisting of two stations as per data available from 2015. These are located in Kalba and Al Hummariah.[2]

The Federal Competitiveness and Statistics Authority (FCSA) of the UAE has data available from each Emirate’s air quality monitoring network for the years 2010-2015. Pollutants measured include PM10, SO2, NO2, O3, and CO. The graphs below show average air quality readings for 2015 for each pollutant in Abu Dhabi, Dubai, and Sharjah. [2]

The 150 μg/m3 limit for PM10 over 24 hours was exceeded at a few locations, however most of these are industrial or open space, such as Mussafah, Mafraq, Liwa Oasis, and Jebel Ali Port, and are therefore expected to have higher concentrations of particulate matter caused by dust or industrial emissions. SO2 readings were well under the 150 μg/m3 limit measured over 24 hours at all stations except Warsan in Dubai, which is an area of several industries, some of which might release high quantities of SO2 through their processes. O3 exceeded the 8-hour 120 μg/m3 limit at Bida Zayed in Abu Dhabi, as well as in Kalba.

Several stations in Abu Dhabi were very close to the limit; these are all located in industrial areas such as Mussafah, Mafraq, and Ruwais. Ozone is typically emitted through vehicular emissions and industrial activity; therefore it is likely that industrial processes located in these areas are the cause of the high readings observed. Readings at all stations for carbon monoxide and nitrogen dioxide were well under the limits. However, not all pollutants are measured at each station, and not each station has readings for every month of the year. The table below provides a summary of the Abu Dhabi, Dubai, and Sharjah monitoring networks for 2015, pollutants measured, and the number of months for which data is available. [2]

To gain a better understanding of the strength of the UAE’s networks and available data, two case studies were considered – those of the US and UK. Both have stringent air quality monitoring networks and are widely considered as benchmarks for countries worldwide.

The UK’s air quality standards are designed to align with those of the European Union. Details on permissible limits are provided in the table below. [3]

The network of monitoring stations in the UK is quite wide ranging. The total number of stations, fixed and manual, numbers more than 1,500 across the country. For the purpose of this paper, only fixed stations were considered, which number 161. [4]

The United States, like the EU, also has stringent air quality permissible limits, called the National Ambient Air Quality Standards. These are part of the Clean Air Act, and cover six major air pollutants. The permissible limits for these are shown in the table below. [5]

Data is available for every state in the US through each state’s data portal. For comparison purposes, this section will look at the state of Indiana’s air quality monitoring network, since the state is similar in area and population to the UAE.

Figure 7 shows the distribution of Indiana’s 85 monitoring stations. These are concentrated around the major urban centres in the state. The colors denote the different pollutants that are monitored. [6]

The table below shows a comparison of air quality monitoring standards across the UAE, UK, and the US.

As seen from the data, not all countries measure pollutants within the same timeframes, so standards for some timeframes were not available. The only standard that is exactly the same across all three countries is that of carbon monoxide limits, which each country caps at 10 mg/Nm3. For sulphur dioxide, the limit in the UAE is almost twice as high as that of the US for measurements conducted over 1 hour, and 50 μg/m3 higher than the UK limit for measurements over 24 hours. UAE limits are also well over twice as high for nitrogen dioxide measured over 1 hour. PM10 standards in the UAE compare favorably with those in the US for 24 hour intervals. It is likely that sulphur dioxide and nitrogen dioxide limits are higher in the UAE to account for several regional factors. Examples of these would include the presence of oil and gas industries, manufacturing facilities, high rate of urbanization and associated vehicular emissions.

In terms of the extent of the monitoring networks, the UAE has a good number of stations in urban areas. Coverage in Abu Dhabi’s non-urban areas is quite good as well, whereas Dubai has just one station outside the actual city limits, located in Hatta. Sharjah’s network, as per published data, is insufficient, with only two monitoring stations in operation in 2015. The UK and US have more comprehensive networks, numbering in the hundreds. However, factors such as area, population, location of industries, and the ratio of urban to non-urban areas all play a part in determining the locations and numbers of these stations.

Table 8 shows a summary of the comparison of monitoring networks. The UAE’s network, averaged across the three main Emirates, has more stations that monitor each pollutant than either of the other two countries. Therefore, there is a better range of data available for each pollutant.

Data availability was also found to vary. Air quality data in the UAE is only available from 2010 onwards, and not every station has consistent readings. Statistics obtained from the FCSA website showed gaps in readings, with some stations displaying measurements for only one or two months of the year. In contrast, the UK and US have data that goes back for decades, with data availability being much more consistent. Additionally, these countries also have data available hourly and daily, which the UAE does not provide. It is unclear if data in the UAE was simply not collected at regular intervals prior to 2010, or if the FCSA website does not display the complete data archive.

Data presentation and accessibility is an important factor in influencing public awareness. In the UK and US, the respective agencies have a wide trove of readily accessible data, information pages, and interactive maps, with the corresponding standards and basic technical information clearly displayed. The UAE has public data available on the FCSA website from 2010 onwards, however since the UAE is a relatively young country, it is expected that data collection and availability will improve over time, along with stronger awareness on the subject.

Overall, despite some limitations in the range of the monitoring network and availability of data, the UAE has been making rapid progress in terms of improving air quality through legislation and international agreements. The three main Emirates are continuing to add monitoring stations, with Dubai having recently purchased a mobile monitoring station to measure 100 different air quality components, and Sharjah adding seven new stations in partnership with Bee’ah, the Emirate’s environmental and waste management company. [7][8]

The UAE has also been pushing for stronger air quality and emissions legislation. A draft standard to lower vehicle emissions was passed in 2016, which will require cars to be more fuel-efficient by following the Corporate Average Fuel Economy (CAFE) guidelines used in the US. This is expected to significantly lower vehicular emissions over the next few years. [9] Along with this, a vehicle emissions tax is also being considered, under which motorists who own fuel inefficient vehicles would have to pay a polluter fee. [10] The Dubai Green Building Regulations and Estidama regulations in Abu Dhabi require certain percentages of bicycle parking spaces and preferred car parking spaces for electric and fuel-efficient vehicles, and electric car charging stations are in operation in several public areas across the country. Public transport has likewise also gained importance; the Dubai Metro and Al Sufouh trams have greatly eased up road congestion and consequently vehicle emissions, and the proposed Abu Dhabi metro and feeder bus and tram networks are expected to have the same effect.

The country is also a signatory on several internationally prominent legislations, most recently the COP21 agreement of 2015, which requires all signing parties to prepare and periodically present Nationally Determined Contributions to achieve the intended goal of zero greenhouse gas emissions in the second half of the century. The UAE in particular has set a target of increasing the contribution of clean energy to 24% by 2021, along with several policy initiatives in the fields of transportation and infrastructure, energy efficiency, water management, education and public awareness. [11] Other important international legislations that the UAE has signed include the Kyoto Protocol, Montreal Protocol, and UN Framework Convention on Climate Change. The UAE also plans to target 90% adherence with WHO air quality standards by 2021.

Overall, it appears that many of the air quality standards compare favorably with those in the UK and US. The UAE’s network performs well in terms of the actual number of monitoring stations deployed in the urban areas across the three major Emirates, with the exception of Sharjah. Coverage could be improved in some areas. For example, Musaffah and the outlying areas of Abu Dhabi city could benefit from additional stations since they are heavily industrial areas, and Sharjah’s network could be expanded to cover the entire city, including the industrial and university areas. Coverage in non-urban areas is not as good, with only Abu Dhabi having several stations outside the main city limits. Most pollutants seem to be monitored across a good range of stations, thus providing several data points. However, data availability itself is not consistent; most stations on the FCSA website do not display data for more than a few months of the year Data presentation could also be improved, so as to better serve awareness and research purposes.

There has been good overall progress in air quality data collection in the recent past, with several initiatives to add monitoring stations and improve data availability across the Emirates. Associated initiatives such as the widespread implementation of green building regulations, improvements in public transportation and policy making, and general awareness about environmental issues have also contributed towards these efforts. Long-term policies and plans recently implemented by the country are also noteworthy – the important COP21 agreement, as well as the national climate change adaptation plan are positive steps that will help spur further efforts towards improved air quality in the UAE.